Seeing a bird’s nest abandoned in a tree or lying on the ground evokes so many pleasurable feelings. As a child, finding a bird’s nest was similar to finding a beautiful treasure. I would rush to pick it up, carry it home and place it on my dresser. I was always fascinated by things in nature…rocks, leaves, shells, bird nests, bird feathers, driftwood….they were all precious objects that gave me pleasure in how they looked or how they felt in my hands and my imagination would fly with the prospect of what stories they could tell if they only could.

The feather soared high in the sky helping propel a bird in its daily chore of searching and securing food. It perched in the tops of trees and scanned the panoramic landscape. It was

slipped between the beak of the bird as it preened. The nest held eggs that ultimately hatched into babies that grew into birds who then abandoned the nest since it had served it’s purpose.

Examining the nest can be an interesting activity.The kinds of materials used to build the nest can sometimes give us hints as to the species of bird that constructed it. A cracked flower pot turned on its side inside a basket on the front porch makes an ideal nesting spot in the eyes of a Carolina Wren. An old boot, floppy hat, or any type of container may prove to be the chosen spot for a wren’s nest. Male and female will gather sticks, leaves, twigs, string, roots, plastic, hay and build a messy nest that tunnels down and to the side. She may line the tunnel and the inside of the nest with grass, moss, dried leaves or feathers. Just imagine how many trips they must make to construct this fine piece of architecture. The Carolina Wren that I discovered one day on the front porch of a country farmhouse had done just that. I could hear tiny peeps of begging baby birds and their parents would flit in and out constantly delivering food for them, totally undisturbed by my near-by presence. Looking into the nest, I could barely see a few tiny beaks. These babies successfully fledged and the nest was abandoned. This is not always the case though. Many times the Carolina Wren makes a bad choice in nest location making it vulnerable to predators…cats, raccoons or possums.

That old cracked flower pot had been recycled by a small Carolina Wren. I guess beauty truly is in the eye of the beholder and “This Old Pot or This Old Boot” was just fine for her “This Ole House”..

A few years ago, I was determined to travel to Port “A” to see the Whooping Cranes. If ever there was a success story of bringing a species back from the brink of extinction, the Whooping Cranes are that story. Although they certainly aren’t out of the woods yet, they have managed 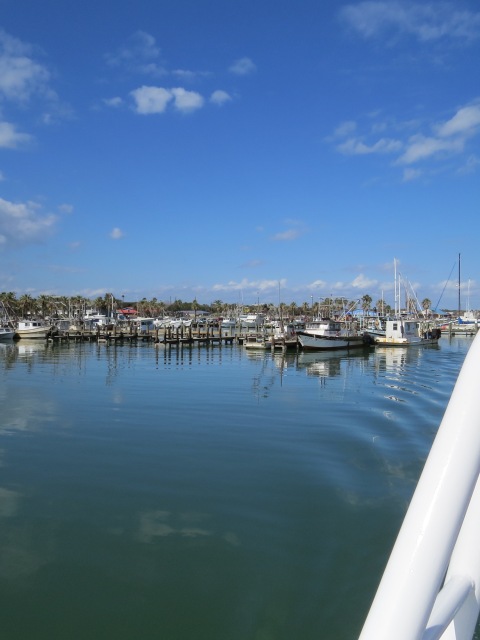 to bounce back from certain demise.

In 1941, the total world population of these birds numbered just 16. Loss of habitat, unregulated hunting, animal predators all took their toll on these magnificent birds. Conservation groups worked hard to try to protect the remaining 16 birds and through their efforts and the passing of the Endangered Species Act in 1967, the world population of these birds has grown to ~ 603. They are huge white birds with a distinctive red cap on the top of their heads. They have a large “bustle” of feathers on their rear which gives them a similar appearance to the Ostrich. They are five feet tall and have wingspans of seven feet. They migrate from Canada where they nest and hatch their young to Port Aransas Texas where they winter at the Aransas National Wildlife Refuge. The young are fed by their parents for up to eight months and migrate South with them. Current population of the only wild migratory “dance” of whooping cranes is ~310. Unfortunately, these birds still face survival challenges.

When I first visited them, I expected to see huge flocks of them, but was surprised to learn that usually they are in groups of three. Mom, Dad and Fledgling peacefully wintering by themselves on an area approximately one half mile in circumference.

Conservationists and wildlife experts recognized that one flock of Whooping Cranes does not assure the survival of these beautiful birds. There are too many exogenous forces….hurricanes, tornadoes, oil spills…which could decimate this one remaining flock. So there have been several projects launched  in an attempt to establish another group. One of these, Operation Migration, involved the hatching of captive bred chicks in Wisconsin to be led by ultralight planes on their migration south to Florida Because these chicks did not have parents to “teach them the ropes” humans devised this unique experiment and set it in motion. The hope is to establish another migratory group and by so doing double the Whooping Cranes chances of surviving a catastrophic environmental event. The people who participated in this did not interact with the chicks in any way other than to dress in bird-like costumes when around the chicks and when they were teaching them to follow the ultralights. Over time, the chicks imprinted on the ultralights and did follow it on their migratory journey. On their journey south, the young birds are memorizing the terrain and will be able to return north without assistance to breed. Unfortunately, a large 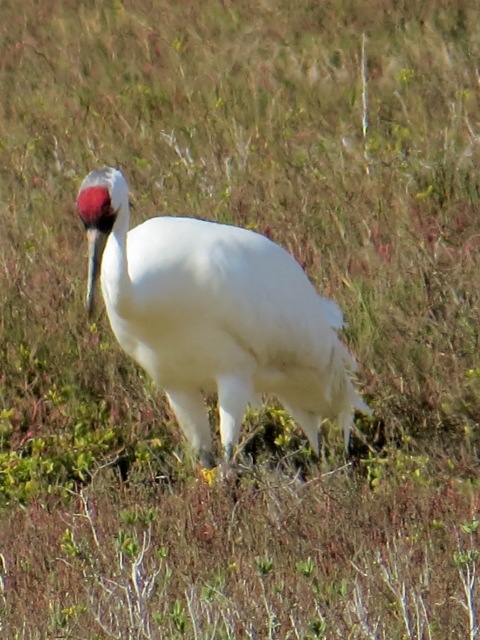 number of the first group of these transplanted chicks were killed by a huge storm that devastated Florida. To date, the efforts to re-establish another migrating flock of whoopers continues and as of February 2015, the count of the Wisconsin to Florida group is ~95.

A few weeks ago a newspaper article recorded the death of two whoopers. They were shot by a teenager and the birds were part of a small introduced flock in Louisianna. The punishment is so minor that it breaks my heart each time I hear of these happenings. Education efforts must be accelerated in our primary schools if we are to avoid such incidents in the future and enable the population of these endangered birds to grow beyond certain extinction numbers.

Birds in captivity are spread out over eleven different locations in the United States. Numbering 121 birds, they are used for egg collection and reintroduction programs. These birds are our insurance policy for the future survival of these very special Cranes.

From November to April it is worth a visit to Port Aransas or Rockport to board one of the tour boats that can get you up close and personal for viewing of these spectacular birds. In the meantime, check out this you tube video – https://www.youtube.com/watch?v=DGX52B9iXXU