One of my favorite movies is Conspiracy Theory with Mel Gibson and Julia Roberts. In this movie Mel Gibson, AKA Jerry Fletcher, is portrayed as a crazy person because of his perverted view of the world. Another favorite of mine is Will Smith and Gene Hackman in Enemy of the State. In this movie Gene Hackman is savvy to government surveillance and Will Smith is trying to survive being murdered. And in one of my favorite television series, Better Call Saul, the main character’s brother believes his body is bombarded with energy waves from any and all electronic devices including electricity and lives within his beautiful home with only kerosene lamps and igloo coolers, all windows blocked from sunlight, never leaving to go out because he experiences real physical pain if he does. No spoiler alert needed here. A well constructed movie is easy to enjoy multiple times. But perhaps it is the subject matter that intrigues me.

Recently a friend and I were discussing the appearance of ads on our social media feeds or in our email. After talking about a certain product, an ad for said product miraculously appears in her mail. She hadn’t googled it so that explanation for its appearance didn’t fly. Last Christmas one of my daughters gifted me with “Alexa”. She sits on my kitchen bar counter silently surveiling, awaiting my voice commanding her to wake up. After our discussion, my mind took the leap to “what if she is always listening” and through her, my every move and conversations are being monitored. And then I jumped to George Orwell’s 1984 book where Big Brother IS always watching, the Thought Police exist and truth is what Big Brother says it is. That book was published as science fiction in 1949 imagining a world unknown at that time and certainly a world that has now become a reality. 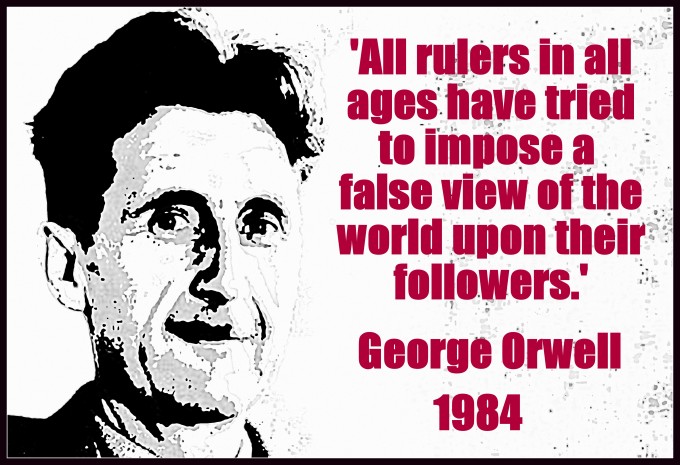 In the movies, conspiracy theorist personalities are fervent in their beliefs that Big Brother is listening at all times. And different methods of interrupting Big Brother’s ability to monitor us are numerous…from tin foil hats to electro magnetic body scanners to devices worn around one’s neck to interrupt electronic signals. Assassination conspiracy theories from  JFK’s assassination to UFO’s and space aliens hidden away in Roswell New Mexico or “Area 51”, to the most current version today known as the Deep State will always exist. It lends itself to excitement, espionage and an escape from everyday doldrums of ordinary lives.

I derive much pleasure from the movies such as the ones mentioned above and it does give me pause when something pops up on my social media feed that I was thinking about, talked about, or searched for on the internet,  but not enough to invest in copious amounts of aluminum foil stock or to purchase products that might envelop me in a cocoon that repulses magnetic waves. I plan on keeping all of the high-tech devices that have made my world infinitely easier. I can’t imagine my life without a cell phone now if for no other reason but safety. And I can still remember the hard work of typing a document on an old-fashioned typewriter and using carbon paper in triplicate for copies before copying machines came into vogue. And if my microwave is spying on me so be it because I will not go back to reheating leftovers on top of the stove or in an oven.