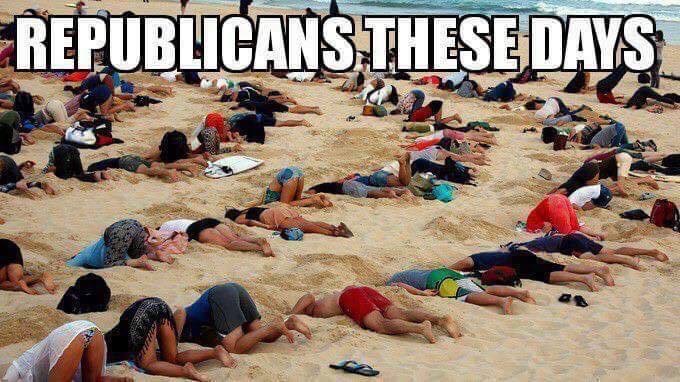 How has it come to this? History will not be kind to those in positions of power who are sitting idly by and doing nothing to stop the ignorant madman who indiscriminately uses fiery rhetoric to inflame distrust and chaos within our homeland as well as globally. His stupidity and childish insecurity may lead to a nuclear holocaust at the worst or at the very least, to the death of hundreds of thousands of innocent people. And if all of this is contrived as a distraction from the Russian probe, like some sort of reality television program, shame on him for creating stress and playing on the emotions of millions of people worldwide. Abuse of power is a horrible thing. Our Constitution has a provision for stopping this from happening but the spineless Republicans in Congress continue to make excuses for the inexcusable. In fact, we have moved from “no contact with foreign agents, to well maybe collusion but that isn’t illegal, to coordination with a foreign enemy, to do we really care if it is illegal since everything is wonderful” No way is this normal in a democratic society. We are witnessing the snail-like progression of a coupe, the demise of democracy and an attempt to move to an authoritarian government.

I miss the days of awakening free of angst that war may be imminent, that healthcare may be ripped from millions, that environmental protections are removed. I want normal again. I crave it.

This man-child has been systematically dismantling the norms of common decency and with his filthy mouth has succeeded  in unleashing the scum hiding under rocks to spew their vile hatred towards anyone who may be slightly different from whom they perceive to be the only “blessed and chosen” people of their God.

I am sick of the professed “Christians” who are so un-Christ like in their behavior.  No way would Jesus condone what is happening to people of color, immigrants, children, the poor and aged of our nation. How is it “Christian” to blithely vote to remove healthcare from millions, eliminate programs that feed hungry children, and foment violence? These actions do not exist in my wheelhouse as examples of christian behavior.

Like so many others in the Resistance, I am exhausted by the daily assaults on my psyche. So we wait, with fear in our hearts, to see if the two man-child demagogues will launch the missiles heard round the world. Please wake up America and realize the dangers that are eroding your right to life, liberty and the pursuit of happiness. Make sure you end up on the right side of history!